Published by Wiley, AI for Lawyers is the definitive guide to AI in law. Order this Wall Street Journal Bestseller today. 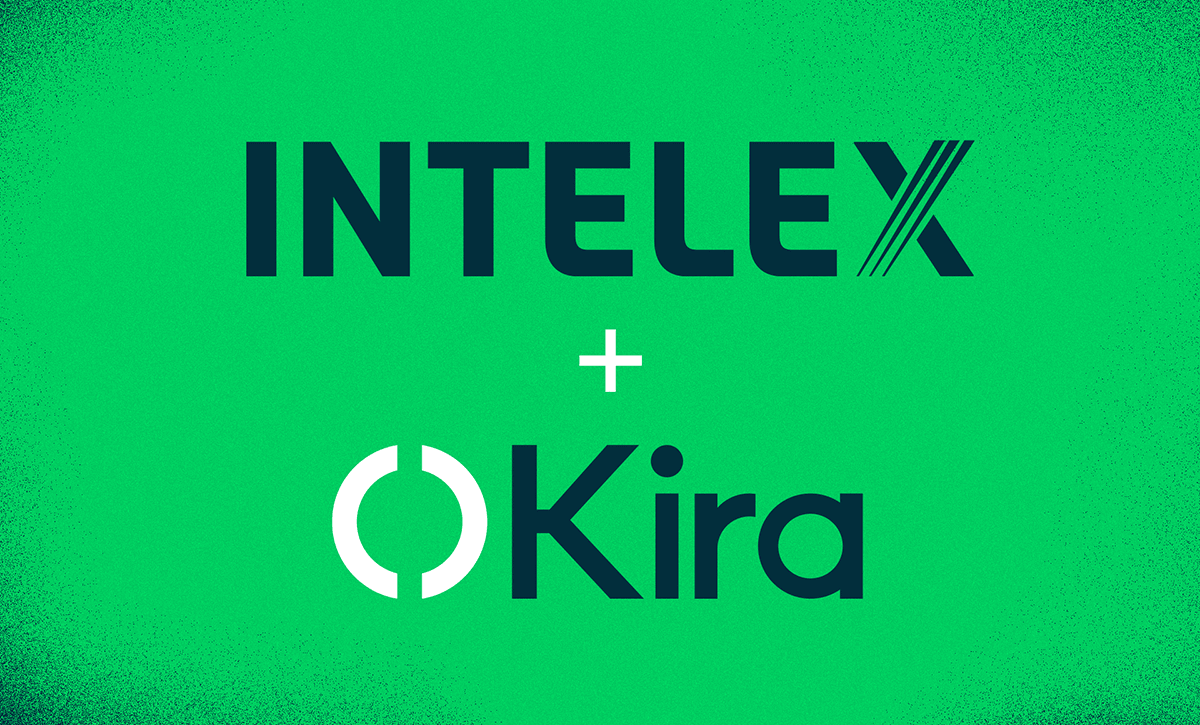 Intelex Technologies is one of Canada’s leading software-as-a-service providers. The company offers software solutions that streamline and simplify environmental, safety and quality management and support compliance across several industries, from pharmaceuticals to manufacturing.

Poised for rapid growth on a global scale, Intelex was acquired by a larger technology company in 2019 for approximately US$570 million. It was the fifth-largest tech acquisition in Canadian history. Kira was a valuable tool in aiding their small in-house legal department to get the transaction done.

With decades of contracts in their archives, many on paper, Intelex knew that their ambitious plans for growth required a more efficient system. They chose Kira to put them at the forefront of contract analysis and centralized business functions.

General Counsel Jeff Gerstl had the foresight to undertake the massive project of digitizing more than 110,000 pages of paper contracts, spanning almost 30 years in business. The scanning took a couple of months, but having that complete set of data makes it possible for Intelex to support its extensive multi-national expansion.

Entering new markets and expanding their ecosystem of global partnerships would inevitably lead to more diverse and complex contracts. Having those contracts centrally accessible and putting tools in place to quickly compare and analyze them was absolutely critical.

In connection with the acquisition process, potential buyers conducted a due diligence process that included requests for legal and business documents. For the three-person legal department at Intelex, the work quickly became time-consuming.

“The due diligence process is all-encompassing for legal teams. As anyone who has been through it knows, when going through an acquisition exercise, you live, eat and breathe magnitudes of diligence requests that can occupy a small legal team for months. There were thousands of questions in our acquisition tracker. New requests would pop up every day, and the task was to address them accurately, and as quickly as possible,” Gerstl says.

The legal department needed to stay on top of this while still supporting the company’s global sales teams, negotiating and drafting new contracts, and keeping the business moving forward.

Using a traditional, virtual data room and manual searches would have significantly delayed the legal team’s ability to keep up with the volume and complexity of the diligence requests. Using Kira to quickly pull the requested data from the contracts allowed them to give fast, accurate responses. According to Gerstl, “The built-in provisions allowed us to respond at a lightning pace.”

He says, “If you don’t have software like this, you either have to respond that getting the information isn’t practicable, or you have to provide a best estimate. That is not a situation I like to be in. I’d rather be sure. Having a tool that can give me the certainty of data was very valuable. There isn’t really another solution like Kira. Based on the value the technology added to our team in this process, Kira is the difference between what ordinary diligence support looks like, and what complete diligence support looks like.’”

The speed and accuracy that the legal team at Intelex was able to provide allowed the transaction to proceed more quickly than would have been feasible in the absence of such a solution. Using Kira, they were able to complete searches for information on various contract provisions in minutes.

Kira’s value to the company has become increasingly clear. At the outset, Kira helped Intelex to centralize and digitize their contract management. This was an essential first step in anticipation of a growth phase as the company increased its footprint around the globe. The need to rapidly analyze and adapt contracts for different regions made Kira more important than ever. With offices scattered around the world, keeping information digitally in a centralized system and being able to track it all efficiently was critical.

“If you’re starting any type of digitization within the legal department, Kira is the tool to use,” Gerstl says. “If you have any legacy contracts that you want to get up to date on—or if you’re looking to get a snapshot of the legal position of a new company you’re working with—this is the tool to use.”

Rachad Misheal, a member of the legal team at Intelex, found Kira’s user interface intuitive and easy to learn. After some initial basic guidance from a colleague, he was working in the system within an hour. Mishael says, “I like the search tool for our identified bank of key terms. It is as simple as searching ‘finance’ or ‘data’ and the system provides a concise description of what kind of terms it can search for. It has simplified the administrative aspects of my job significantly so I can focus on providing legal expertise.”

With its expansion into new markets, Intelex has also seen its contracts become increasingly complex. Using Kira, comparing contracts for different markets accelerates the speed of the legal team’s response while also providing the confidence in its accuracy. Gerstl says, “Without Kira, keeping pace with legal nuances across the world is next to impossible. If we’re engaging a subcontractor located in another region, we can quickly check all of our contracts there to see if there are any data restrictions. Kira can check that in minutes, sometimes seconds.”

Intelex now also has a wider range of business functions needing legal support. Without Kira to reduce the time and manual searching required, there would be a need for a much larger legal team to handle all of the work involved.

“There’s an off-label use that we really love, which is the document compare function,” Gerstl says. “The ability of Kira to compare a PDF to a Word document is critically important to track changes made to a document, and especially when those changes were not agreed upon or tracked in previous versions.”

As other departments at Intelex learn about the power of Kira’s software, they are also finding ways to use the system to improve their processes. The legal department is working with them in areas such as engaging subcontractors, and queries from departments like Finance and Operations.

Intelex continues to find new ways to harness the power of Kira’s tools and solutions to reduce their administrative burden and improve their contract management.

Almost 30 years of contracts analyzed, and support for hyper-growth into new, global markets.

Get the latest legal tech insights sent straight to your inbox